This publication based on: Midwest Invasive Plant Network. 2008. Why should I care about invasive plants? How invasive plants impact hunting, fishing, boating, gardening, hiking, biking, horseback riding, and other recreational activities in the Midwest. From MIPN.org.

Cogongrass, an invasive grass from Asia, is considered “the seventh worst weed in the world”. It was introduced, accidentally, into Alabama in 1911 as seeds in packing materials from Japan. This species is widespread in Florida, Alabama, and Mississippi and is starting to spread in Georgia, South Carolina, and Tennessee. Cogongrass now contaminates 1.25 million acres in the southeastern United States. This invasive exotic can displace native plants and animals as well as threaten the safety of people and their structures.

Ornamental introductions continue to be made in the U.S. with the numerous “red cultivars” offered by nurseries. These cultivars are subject to much debate by invasive plant researchers and managers. Horticulturists affirm that there is little potential for the red cultivars to revert to the “invasive” form; invasive plant researchers suspect that the potential is definitely present. In more northern latitudes cogongrass may not successfully overwinter but most of the Eastern U.S. and Pacific Northwest states may be at risk of invasion.

Cogongrass spreads by both seed and root fragmentation (rhizomes). Windblown seed can move several miles in air currents and plants can produce up to 3,000 seeds per season. Seed and rhizomes move even farther when hitchhiking on equipment, mulch, and fill materials. Rhizomes can form a dense mat in the upper 6 to 24 inches of soil and fragments of less than 1/4 inch can re-sprout. This makes control by disking and mowing highly ineffective and can spread populations even further.

Vegetative spread in existing infestations was recently found to exceed 200 sq ft. per day, in drought conditions, in the Florida Panhandle (C. Ramsey, USDA APHIS-PPQ-CPHST, personal communication). Spread along right-of-ways, through road construction and other maintenance activities, has resulted in widespread movement throughout Alabama, Mississippi, and Florida. To date, most infestations in Georgia and South Carolina have been introduced by contaminated equipment used for site preparation, tree planting, wildlife food plot preparation, power line installation, movement of contaminated fill dirt, and other direct movements by man. Once a population is established, eradication is difficult, expensive, and could take years. 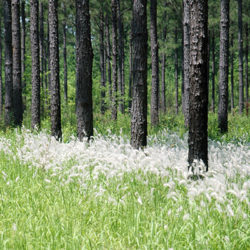 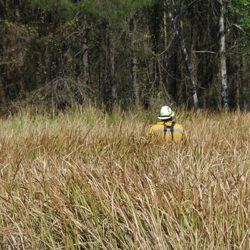 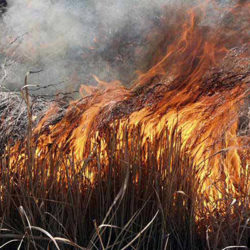 Cogongrass is a fire-adapted species and thrives where fire is a regular occurrence. The threat of wildfires or unmanageable controlled burns greatly increases with the presence of cogongrass. Cogongrass fires are hotter, faster, and higher than native grass fires. These factors can spell trouble for people and structures near large infestations.

Cogongrass not only replaces native plants, on which wildlife feed, it also has very high silica content, and therefore is unpalatable to native wildlife. The leaves are very stiff and can cut the mouths and damage the teeth of wildlife that attempt to ingest it. Infestations can be so dense that it impedes the ability of small animals to travel through and leaves little value for brood-rearing habitat for ground-nesting birds.

What can I do to help prevent the spread of cogongrass?